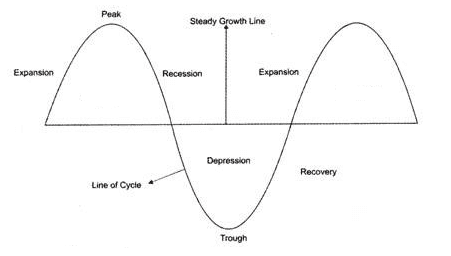 Although the general consensus among economists is that the business cycle is still alive and well today, what causes changes in the output growth rates of economies has remained up for debate. There have been many credible theories published attempting to explain this, including changes in monetary and credit market conditions, over-investment, business innovations and technology advancements, changes in aggregate demand and supply, and levels of saving relative to productivity. There are also many external factors that can affect the outcomes of such theories. When looking at what has caused booms and recessions in the past, we are drawn to factors such as wars, political change, population explosion and changes in the supply of money.

Where are we now?

The big question posed to investors today is, where are we in the current business cycle and when will the next turn in the cycle come? One look at the economic growth of the world’s leading economies and stock markets over the past 10 years will make it clear that we have been in an expansionary phase for quite some time. However, pinpointing when the cycle has peaked can be an impossible task. There are, of course, indicators that can suggest a recession is coming, or at least there have been in the past.

A typical expansion generally lasts between three and five years and given we have been in a bull market since we came out of the financial crisis in 2009, many speculators suggest that a recession is on the horizon. Of course, a prolonged expansionary phase alone is not sufficient evidence to presume a recession is looming; given similar situations have been experienced after the great recession in the 1930s and during the 1990s.

Why has the cycle elongated?

There are several explanations as to why the current cycle has elongated. A primary factor is that we started this cycle at a low base, given the extent of the financial crash of 2007-09. Central banks have also rolled out extensive monetary policy stimulus through quantitative easing, which has encouraged economic output. Latterly, President Trump’s accommodative corporate tax reform has further boosted big business in the US, and subsequently the stock market and output growth. A further proposition to consider, which has gained momentum over the past several decades, is the possibility of a “great moderation”, attributed to the changing demographic of economies and monetary policy. The volatility of economic output growth in the G-7 economies has declined since before the 1980s, which may have had a subduing effect on the severity of business cycles.

Are there signs of a turn in the cycle?

In the past, inflation has been a primary indicator of when an economy is experiencing a peak in growth, but we are yet to experience any troubling levels of inflation. However, as oppose to inflation, we have observed the growth of asset bubbles, especially the US dollar. An interesting recent development was the inversion of the US Treasury yield curve. The yield on the 10-year Treasury note fell below the yield on the 3-month Treasury note, meaning investors were demanding a higher premium on short-dated government debt; a phenomenon that often precedes a recession.

Primary leading indicators are not predicting a major recession any time soon; however, they have not had a perfect track record in predicting previous recessions and should not be studied in isolation. Unemployment levels and stock returns have given very little sign of an imminent slowdown in the economy and confidence within the G-7 economies is also in a relatively healthy state, despite recent falls.

The lack of leading fundamental data pointing towards a recession should not lead us to believe that there are no serious threats to our economies today. Possibly the greatest threat to the global economy comes from the balance sheets of central banks and the fact that they have largely exhausted their monetary policy tools to provide stimulus to their economies, although negative interest rates are being discussed. Another risk to consider is the level of private and public sector debt in major economies, inhibiting further fiscal stimulus. Furthermore, political uncertainty across Europe and the possibility of a worsening in trade tensions between the US and China looms over the global economy.

Considering how long the current expansionary phase of the business cycle has lasted and the risks to the global economy today, we should consider ways in which to provide protection to our portfolios in the event of a turn in the business cycle and subsequent recession. History shows us that investors who believed an expansionary phase would continue unabated, for example during the Great Recession, retained too much risk in their portfolios and could not act quickly enough to protect their portfolios when the cycle turned. Whilst not all expansionary phases end in a crash, safe haven assets are a reasonable hedge of the aforementioned risks late cycle, such as government bonds, high quality corporate bonds, and cash. Assets that hedge against inflation should also be a consideration, such as gold and index-linked government bonds.

The question for today’s pension schemes is whether now is the time to de-risk following one of the longest bull markets in history.

Individuals under 40 should leave their pensions alone, sit tight and wait for things to get back to ‘normal’ - bit.ly/3fLkDMp pic.twitter.com/P9Uf8tzxeQ

If you’re a member of a Defined Contribution scheme, find out how the increasingly volatile markets are likely to affect your pension: bit.ly/2ZeNza3 pic.twitter.com/IGwNXapcoN

Thank you to everyone that has joined us in our ongoing COVID-19 webinars. Stay tuned for new event announcements here - bit.ly/2Ls1OQr pic.twitter.com/t7dGj4Iba0

Is it time for central banks to try something new to stimulate economic growth? bit.ly/360Ktrp pic.twitter.com/z76zWF9exj

Quantum Partner, Stuart Price, reassures those in their twenties, thirties and forties that short term fluctuations in the market are unlikely to have a lasting impact on the final value of their pension: bit.ly/2Lw9FMM pic.twitter.com/XBoVi8trhK

13:31 · 22 May 2020
Follow @QuantumAdvisory
A cookie consists of information sent by a web server to a web browser, and stored by the browser. The information is then sent back to the server each time the browser requests a page from the server. This enables the web server to identify and track the web browser. We use both “session” cookies and “persistent” cookies on the website. We will use the session cookies to: keep track of you whilst you navigate the website in order to improve your experience. We will use the persistent cookies to: enable our website to recognise you when you visit. Session cookies will be deleted from your computer when you close your browser. Persistent cookies will remain stored on your computer until deleted, or until they reach a specified expiry date. We use Google Analytics to analyse the use of this website. Google Analytics generates statistical and other information about website use by means of cookies, which are stored on users’ computers. The information generated relating to our website is used to create reports about the use of the website. Google will store this information. Google’s privacy policy is available here.OkRead more