On 3 March 2020 the Pensions Regulator (tPR) launched the first part of its consultation on the funding of defined benefit (DB) pension schemes. This consultation builds on the conclusions of the government’s White Paper published in March 2018 and the proposals made in Pension Schemes Bill which was brought to Parliament on 7 January 2020. The consultation closes on 2 June 2020 and is seeking views on:

The second part of the consultation is due to be launched later in 2020 will focus on the draft revised DB funding code of practice, what guidelines might look like and any changes to legislation. tPR anticipates that the new code and any supporting legislation will come into force at the end of 2021.

tPR sets out eight key principles in the consultation which are described below:

tPR is not expecting all schemes to set TPs at an LTO level immediately or within a short timeframe. TPs are intended to measure progress towards LTO and tPR recognises there are many different paths that trustees can take to reach the LTO.

Building on the need for greater clarity, tPR is proposing a twin-track route to compliance with the funding code. These two routes are termed “Fast Track” and “Bespoke” and trustees would be able to choose which route they wish to follow. The principles described above will apply to both approaches.

With the proposed Fast Track approach, tPR is not intending to re-introduce a “Minimum Funding Requirement” style regime but believes an objective funding standard where the prudence and level of risk is assessed against prescribed benchmarks is needed to bring the desired clarity.

It is worth noting that trustees will not be committed to maintaining one particular approach at future valuations – this decision will be driven by the circumstances of a scheme.

The two routes can be summarised as follows: 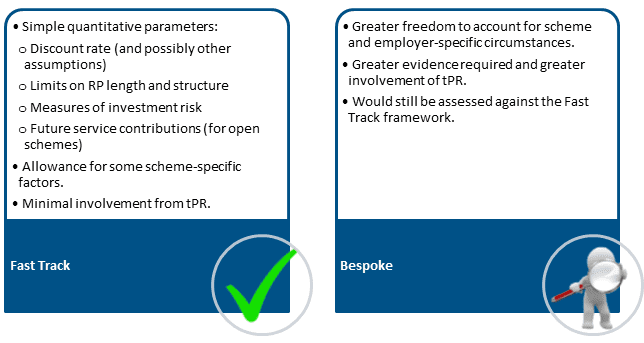 tPR is collecting feedback in response to the consultation, and also via stakeholder events that are taking place across the UK.

The full consultation document can be found here:

For further detail regarding how the proposed regime is likely to affect your scheme, please get in touch with your usual Quantum contact.

PASAs GMP Equalisation Working Group has issued its latest guidance covering the thorny issue of when rectification should be carried out. Aled Edwards, Partner&Actuary at Quantum, sat on the sub-group which produced the guidance. Available now buff.ly/2UuR4oP @PASAtweets pic.twitter.com/olTOY2pKbS

PASAs GMP Equalisation Working Group has issued its latest guidance covering the thorny issue of when rectification should be carried out. Aled Edwards, Partner&Actuary at Quantum, sat on the sub-group which produced the guidance. Available now buff.ly/3bidSyT @PASAtweets pic.twitter.com/iiBbEegR2f

4:42 pm · 18th March 2020
Follow @QuantumAdvisory
We use cookies to ensure that we give you the best experience on our website. If you continue to use this site we will assume that you are happy with it.OkRead more