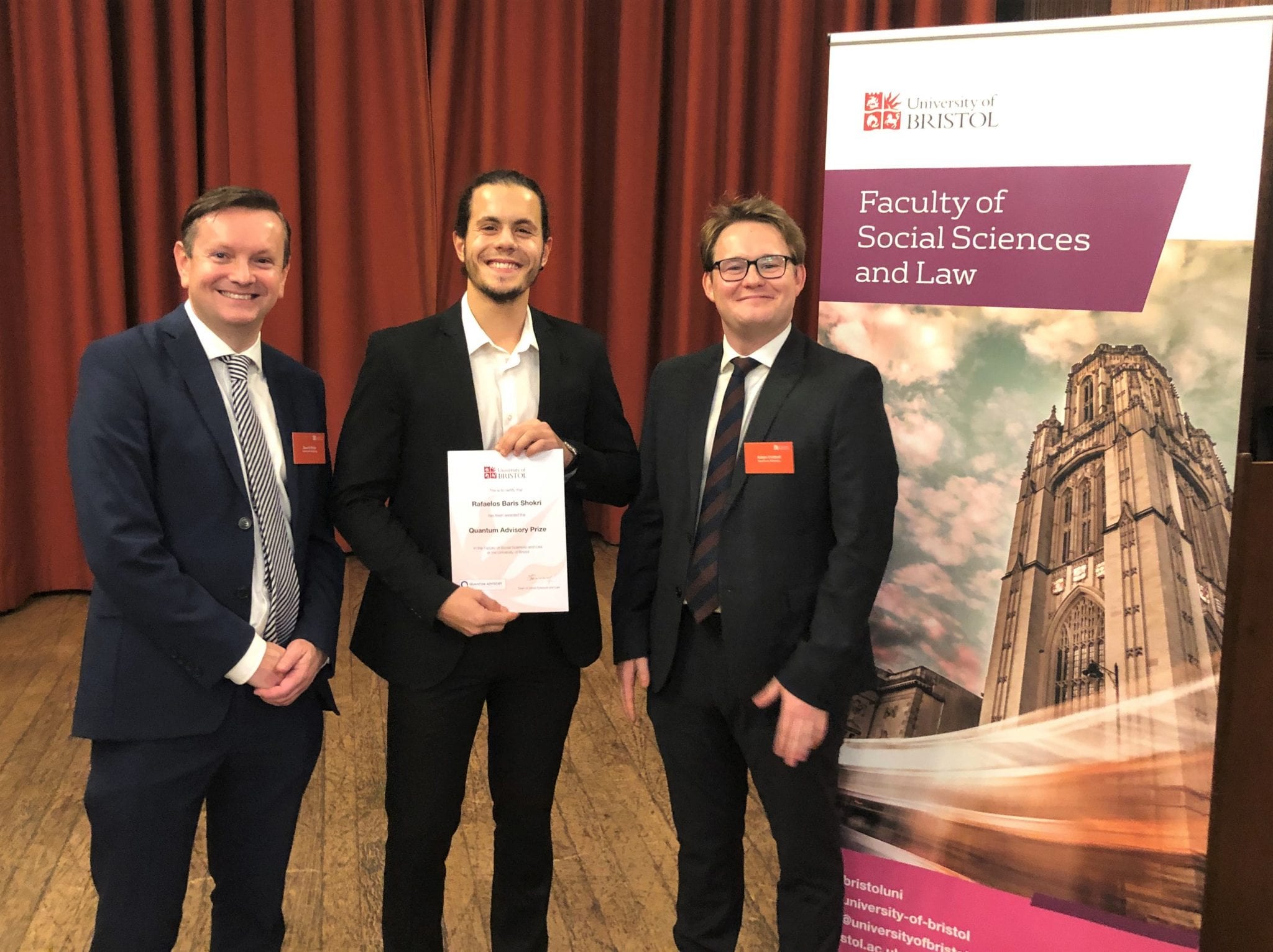 An Accounting and Finance student at the University of Bristol has secured the Quantum Advisory Prize 2019 for his outstanding performance at second-year level, and with it, £1,000 to help further his career.

Rafaelos Shokri, a 22-year-old student from Cyprus, impressed University staff with his consistent high marks, achieving an overall grade of 83% including the University’s highest result ever in its Taxation examination, at 95%.

Rafaelos, who has now returned for his third and final year on the BSc Accounting and Finance course, was recently presented with his award and prize funding at the prestigious Faculty Ceremony (OCT 14) at the Wills Memorial Building by Partner and Actuary at Quantum Advisory, Stuart Price and Quantum Advisory Consultant, Adam Cottrell.

The Quantum Advisory Prize was established in 2018 at the University of Bristol and is awarded to the highest achieving finance students.

Rafaelos, who hopes to acquire the ACA (Associate Chartered Accountant) and CFA (Chartered Financial Analyst) qualifications after graduating and pursue a career in the professional services, said: “When I received the email from my Professor informing me that I had won the Quantum Advisory Prize, I was quite frankly overwhelmed! I couldn’t believe that I had achieved the best overall performance in my year, but I was delighted to know that all my hard work paid off and the news has motivated me to work even harder for this year. The prize money will contribute towards my savings for travelling the world and I also intend to use some for investment purposes.”

Of course, the highlight of the event was presenting Rafaelos with his award, which was a privilege. The effort he has put in clearly shows in his grades and it was interesting to hear about his future career plans. I’ve no doubt he will be very successful in his chosen field.”

Quantum Advisory has an office in Prince Street in Bristol and specialises in pension and employee benefits services to employers, scheme trustees and members.

Would you like to know about Actuarial roles in Pensions and Investment? We are running an Open Day on 26 February, offering the chance to visit our HQ in #Cardiff to find out. Limited to 12 people on first come first served basis - Book your place now! buff.ly/35PEDXW pic.twitter.com/vmi5pXOuIL

PPF levy 2021/22 – a new frontier? We look at the key points, the expected impact on levies, and what this means for your scheme... buff.ly/2tZKAo0 @PPF pic.twitter.com/5LS5x86WLY

Kicking off the first @CdfBusinessClb event of the New Year last night with guest speaker Jonathan Lewis, CEO of @CapitaPlc - Refreshing to hear how he turned around failing business with a focus on culture, people and values, and not purely looking at profit #CardiffBusinessClub pic.twitter.com/vSAYwEsfWY

Attracting talent in a candidate’s market - Stuart Price, Partner at Quantum, looks at why ethical employee perks are not only the right thing to do but a smart move in today’s competitive hiring environment buff.ly/3a2oGB7 @WalesHRNetwork pic.twitter.com/kOWzbxIWbd

9:15 am · 14th January 2020
Follow @QuantumAdvisory
We use cookies to ensure that we give you the best experience on our website. If you continue to use this site we will assume that you are happy with it.OkRead more