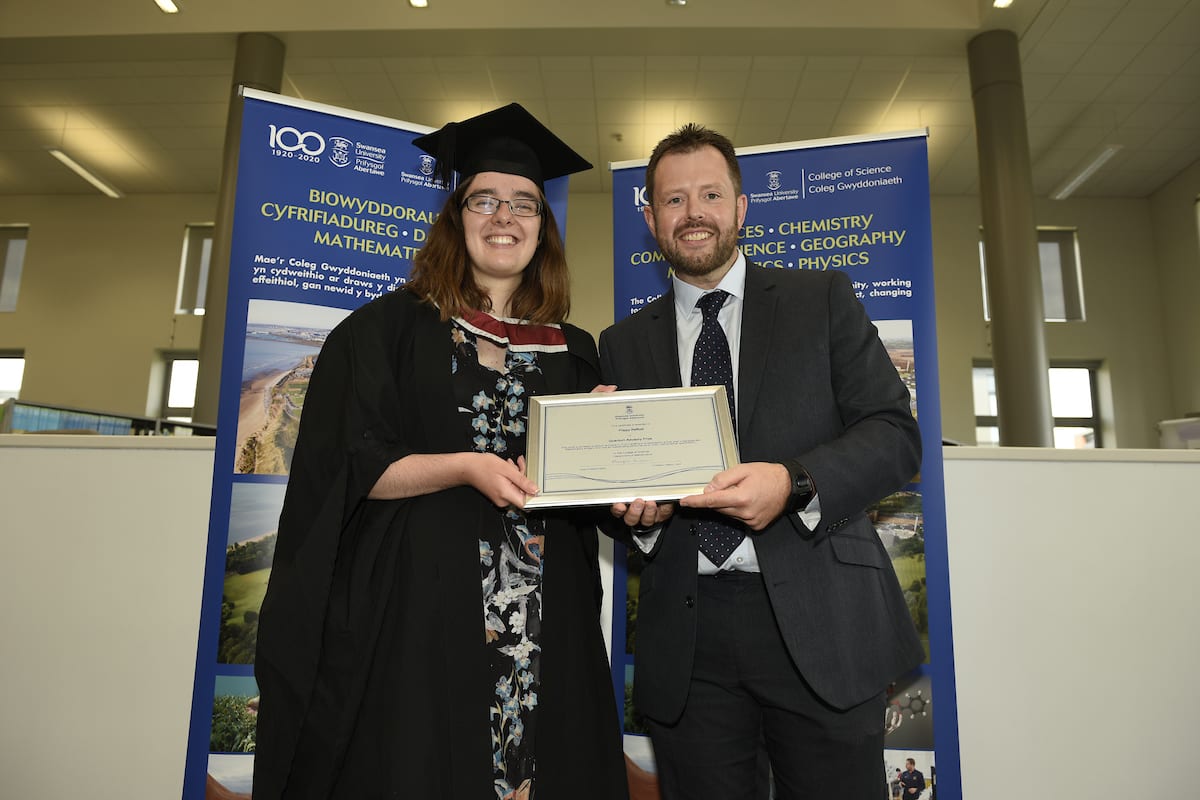 A Swansea University graduate has secured this year’s Quantum Advisory Prize for the most original contribution to mathematics, and with it, a £1,000 sum donated by pension experts Quantum Advisory, to kickstart her chosen career.

Poppy Reffold was recently announced as the recipient of the Quantum Advisory Prize 2019 for her in-depth study about the ‘Chaos Theory’. She was awarded the prize by Quantum Advisory Consultant Lawrence Davies on 26 July at Swansea University’s graduation ceremony at the Bay Campus. In her comprehensive report, Poppy explored the evolution of chaos as a concept and researched ways in which a system of equations can be tested to see if it is chaotic. Through her work, she was able to formulate her own system and consider if it could be called an example of chaos.

Poppy, originally from Rochester in Kent, secured a First in her Master of Mathematics (MMath) degree which she had been studying at Swansea University for three years. Dr Edwin Beggs of the Department of Mathematics, and Poppy’s project supervisor, said: “Poppy chose the subject Dynamical Systems and Chaos for her final project; a subject that she was clearly very interested in. A classic example of a chaos system is the weather, so the topic is of great importance. However, it is also a difficult topic to write about, as parts of the behaviour of chaos systems are still not well understood. Poppy gave a brilliant overview of the subject, and also detailed calculations which showed that she had an excellent command of the subject.”

Poppy, who is due to start working as a Technical Business Analyst with Acturis Limited this month (AUGUST), said: “I am very happy to be finishing my MMath degree with first class honours. One of the first mathematics books I read was all about chaos theory, so having the opportunity to delve deeper into the concept was something I really enjoyed. The fact that I was also rewarded a prize was a surprise that I am deeply grateful for and I would like to thank Quantum Advisory for sponsoring the prize. I never would have made it to graduation without the support of my lecturers and the rest of the staff at Swansea University. In particular, I would like to thank my project supervisor, Dr Edwin Beggs, and Professor Eugene Lytvynov who was my personal tutor for three years.”

Quantum’s Lawrence said: “It was once again an absolute pleasure to support Swansea University and, in particular the mathematics department. The work that Poppy produced, and the effort she put in, was first class and we have no doubt she has a bright future in her chosen industry.”

Quantum Advisory, which specialises in pension and employee benefits services to employers, scheme trustees and members, has a longstanding relationship with Swansea University, providing actuarial and administration services to their staff pension scheme, and welcoming many graduates to their organisation. This is the fourth year the Quantum Advisory Prize has been running.

We held our South Wales and West "Pensions for Brunch" webinar on 30 June 2020. For details please see our podcast at....bit.ly/3e0DxNq

Our QChoice service gets to the heart of what your employees want out of their benefits and creates the perfect solution for you quantumadvisory.co.uk/company… pic.twitter.com/AW8mypEkdN

Today's edition of BNW is out with a story encouraging @WelshGovernment to open up the housing market in #Wales. We also have columns from Ben Francis at Federation of Small Businesses (@FSB_Wales ) and Stuart Price from @QuantumAdvisory conta.cc/2NtKqvG pic.twitter.com/fRev3bdwbm

On Tuesday 30 June we will be hosting our Pensions for Brunch seminar online. The free webinar will feature Quantum’s Stefano Carnevale and Simon Hubbard alongside @OsborneClarke’s Claire Rankin and Alicia Cain. Register here: bit.ly/3hYEAQT pic.twitter.com/ZICGodEEqr

13:10 · 24 June 2020
Follow @QuantumAdvisory
A cookie consists of information sent by a web server to a web browser, and stored by the browser. The information is then sent back to the server each time the browser requests a page from the server. This enables the web server to identify and track the web browser. We use both “session” cookies and “persistent” cookies on the website. We will use the session cookies to: keep track of you whilst you navigate the website in order to improve your experience. We will use the persistent cookies to: enable our website to recognise you when you visit. Session cookies will be deleted from your computer when you close your browser. Persistent cookies will remain stored on your computer until deleted, or until they reach a specified expiry date. We use Google Analytics to analyse the use of this website. Google Analytics generates statistical and other information about website use by means of cookies, which are stored on users’ computers. The information generated relating to our website is used to create reports about the use of the website. Google will store this information. Google’s privacy policy is available here.OkRead more